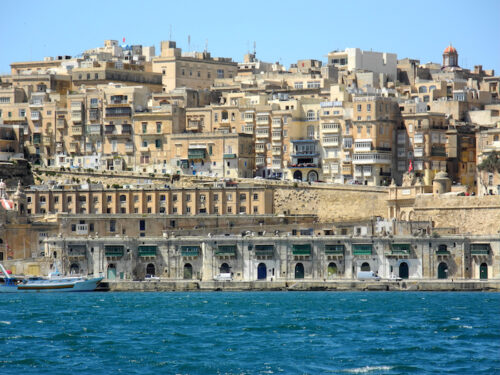 Malta is a beautiful archipelago in central Europe. Aside from its beautiful beaches and blue oceans, the island country has a lot to offer. This country is also rich in Maltese Cities culture and history.

Explore Malta’s amazing fortifications, megalithic temples, and Neolithic burial chambers. Swim on the beautiful beaches, eat Maltese cuisine, and then work it off by ascending the fossil-filled limestone cliffs or scuba diving in the spectacular underwater caverns. What’s the best part? It boasts warm winters and pleasant summers, making it an ideal vacation destination.

Sliema, which means “peace,” is a vacation town on Malta’s northeastern coast. The wealthier Valletta inhabitants used to spend their summers in this modest fishing town. It is now thriving retail and socializing destination.

The ‘Sliema Front,’ Sliema’s primary attraction, stretches from Ta’Xbiex (in the south) to St. Julian’s (in the north). The promenade connects the three cities for around 10 kilometers. It’s always crowded with runners, picnickers, and BBQ enthusiasts.

St Julian’s is located to the northwest of Valletta. Julian the Hospitaller, a patron saint, inspired the name. This settlement was formerly only a fishing village. It is now a popular destination for nightlife and tourists. Along the waterfront, there are several magnificent hotels.

St Julian’s has a lot to offer in terms of sights and activities. St. Julian’s is a wonderful area to walk along the seafront and see Portomaso Tower. This entertainment district is jam-packed with bowling alleys, movie theatres, and late-night bars.

Self-guided tours are simple to arrange here. Visit Balluta to see the neogothic church of Our Lady of Mount Carmel and the Art Deco structures that surround it. Take a romantic boat around the bay or go swimming in St George’s Bay.

Continue to Spinola Bay to see the Love Monument and the renowned palace. You may put your padlock and good luck in love here. Pembroke’s historic barracks homes have been given new life, as has some fantastic street art near White Rocks.

Mdina is a fortified city in the northern area. During the Middle Ages, it served as Malta’s capital. Birgu became the administrative center of the Order of St. John. It is still a walled capital with a population of fewer than 300 people. Rabat is nearby and has a population of 11,000 people.

Maleth was founded by Phoenicians in the eighth century BC. The name was later changed to Melite by the Romans. It was conquered by the Byzantines and shrunk to its current size, yet it retains much of its medieval beauty. There are several magnificent examples of Baroque and Norman architecture, as well as buildings utilized as private houses.

Mdina, Malta’s most popular tourist destination draws 750,000 visitors each year. The city is well-known for only permitting ambulances and residents’ automobiles. That is why it is known as the “Silent City.” Visit the city walls, St. Paul’s Cathedral, and other sites in Rome.

Valletta, often known as the Fortress City, is a city on the southern Mediterranean coast. It makes several well-known assertions. It is both the European Union’s southernmost capital and its smallest capital. Valletta, Malta’s administrative and economic hub, was “constructed by gentlemen for gentlemen.”

This Maltese capital city is notable for its Baroque architecture, which is inspired by Neo-Classical, Mannerist, and Modern styles. Many historical wonders may be found here. Ancient forts and historical museums are among them, as are 16th-century residences, Baroque gardens, palaces, and cathedrals, as well as a range of historic buildings.

Men Type Quiz Made for the Women: What this quiz is all about & how to play it?

Where is the Throne of Thunder Entrance?

No Result
View All Result